Field work in April and May 2006 north of Canada/Greenland

Denmark ratified the United Nations Convention (UNCLOS) on the Law of the Sea in November of 2004. Article 76 of UNCLOS describes the rules for extending the limits of the continental shelf beyond the Exclusive Economic Zone (EEZ) with a width of up to 200 nautical miles. Denmark has ten years from the date of ratification to collect the appropriate information and submit the necessary documentation for an extended continental shelf to the United Nations Commission on the Limits of the Continental Shelf (CLCS).

If the CLCS confirms the information in the submission, Greenland will obtain the right to exploit the resources (incl. biological) at the seabed and the subsoil beyond the EEZ out to a distance of 350 nautical miles from the coast. If it is possible to prove that the Lomonosov Ridge is a submarine elevation and that it is a natural prolongation of Greenland’s land territory, the area can be expanded even farther and potentially include the North Pole.

Greenland is adjacent to Ellesmere Island, which is a part of Canada, and both countries have the possibility of using the Lomonosov Ridge as a natural prolongation of their land territory. Bathymetric (water depth), seismic and gravity data are needed to substantiate the nature of the ridge. A co-operation between Canada and Denmark (on behalf of Greenland) has been established in order to acquire the necessary data. Both countries will benefit from a collaboration to investigate the Lomonosov Ridge: saving costs, sharing personnel resources and maximising the outcome of the expedition. A joint effort will also minimise the environmental impact. On 27 June 2005, representatives from Natural Resources Canada (NRCan) and the Geological Survey of Denmark and Greenland (GEUS) signed a Memorandum of Understanding (MOU) in Ottawa.

In order to examine whether the Lomonosov Ridge is a natural prolongation of the Canadian/Greenland land mass, we examined the crust building from the mainland and into the Arctic Ocean. We used the seismic refraction technique with explosives, which means that we used sound waves to map characteristic seismic velocities in the underground to a depth of approx. 50 km. The seismic refraction method provides detailed information on the distribution and thickness of subsurface layers in the underground. Our sound source was an explosive called Pentolite, which was suspended approx. 100 m underneath the ice. The sound, after it was reflected and refracted through the layers in the underground, was recorded on digital seismometers on the sea ice. We fired Pentolite weighting between 200 and 400 kg with approx. 32 km between them. The spacing of the recording instruments was 1.3 km. We gathered data along three line segments.

The lines ran from the mainland along the Lomonosov Ridge (approximately along the unofficial median line between Greenland and Canada) and in addition there was a cross line. The field work had its base at the Canadian military station Alert (see map and photo). Around 30 people participated in the expedition and a small camp was established on the ice as a fuel and weather station in the middle of the working area. Equipment and personnel were transported out of Alert by three helicopters and a Twin Otter aircraft, all dedicated to the project. 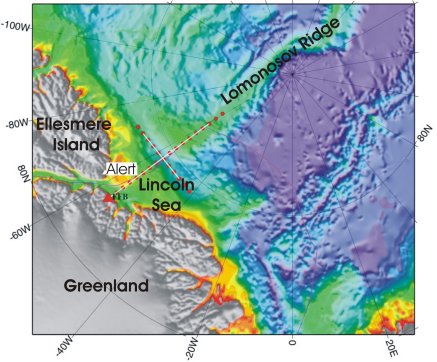 The map shows the lines (seismometers along lines in white, shots in red). The white lines were measured during one field season, lasting six weeks from the beginning of April to early May. The data were acquired with 150 seismometers on each line segment of 200 km length. The line along the Lomonosov Ridge was 400 km long and the acquisition of data from here was split into two parts; the cross line was 200 km long.

The working sequence for one line segment was as follows:

As shown, one segment requires six days of work but weather and ice conditions as well as technical difficulties can delay the work.

The movement of the sea ice can generate sound pressure levels as high as 180 dB. The thick ice inhibits marine mammals such as whales from living in the region because there is little open water where they can surface. The expedition was planned for 1 April to early May after the long polar night when the light had returned, and the winter snow had not yet begun melting. Biological productivity in the region is low due to the perennial ice cover and even further reduced this time of year. The acquisition plan required flying along the lines several times before the explosives were fired, thus we were able to assess if any seals or bears were in the area. 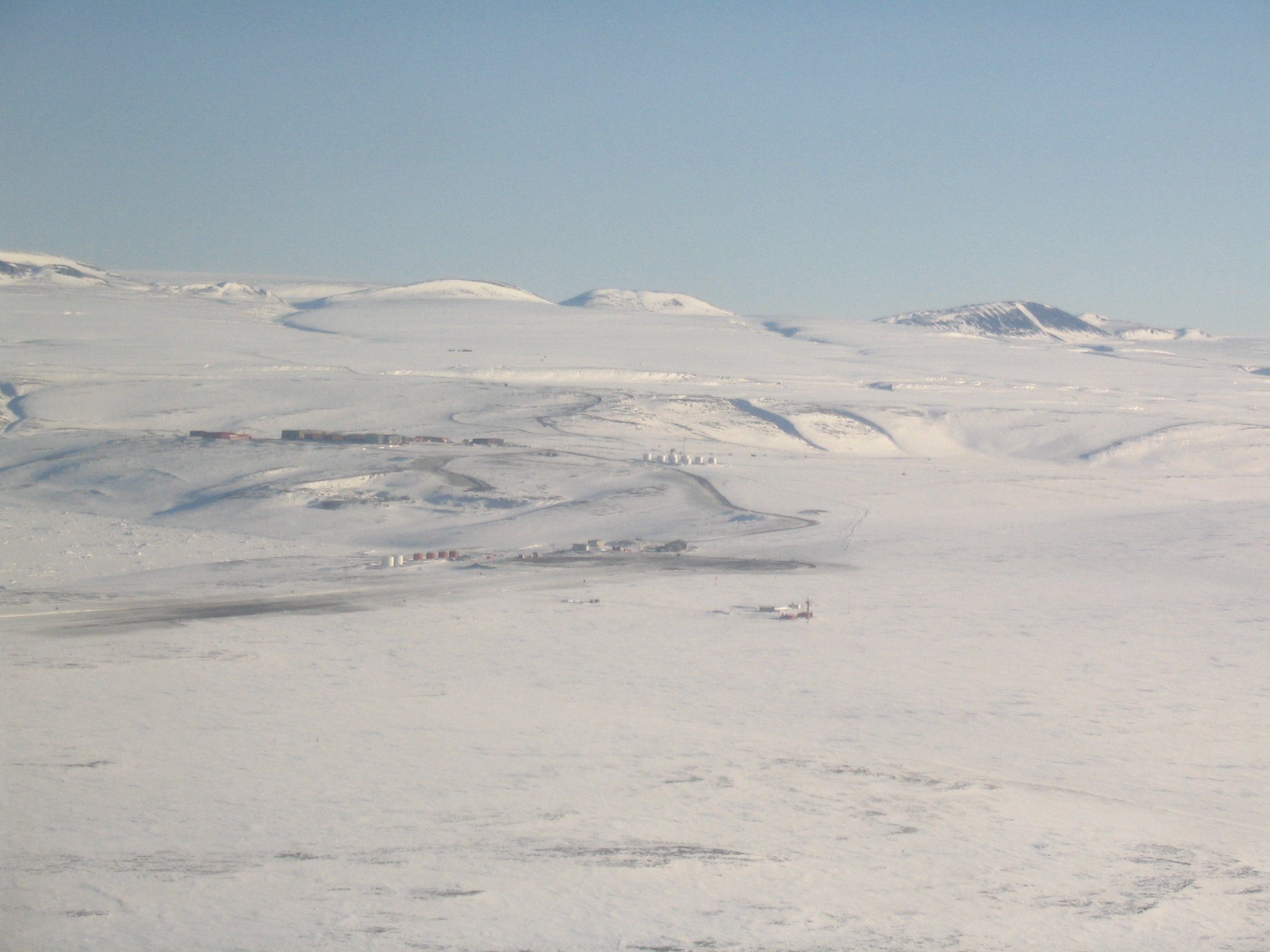