You are here: Home / LOMROG I

In 2007, the Continental Shelf Project acquired data on the LOMROG I cruise with help from the Swedish icebreaker Oden and the Russian nuclear icebreaker 50 let Pobedy (50 Years of Victory).

Project description of the LOMROG I cruise

The logistical conditions in the area are very challenging both for the ship and the equipment. Ice thickness of up to 5 metres are to be expected, with pressure ridges up to 20 metres thick. The Russian nuclear icebreaker 50 let Pobedy (50 Years of Victory) – which is the most powerful icebreaker – therefore supported the cruise to ensure that the area of interest can be reached.

The data coverage in the area of interest in relation to the Continental Shelf Project is very sparse. This cruise will concentrate on the acquisition of bathymetric data, gravity data and seismic data. Our Swedish partners are planning to acquire geological samples as well as carry out oceanographic measurements.

Before the cruise, Oden will be equipped with new and very advanced multi-beam echo sounder equipment financed by Swedish grants. The seismic equipment we are going to use is presently being developed in co-operation with the Geology Department of Aarhus University, based on experience gained on previous seismic data acquisitions in ice-filled waters, carried out by e.g. the University of Bergen, the Alfred-Wegener-Institute in Bremerhaven and the U.S. Geological Survey (USGS). Thus, this will be the first time our equipment will be tested in ice-filled waters.

The cruise, which has been named LOMROG (Lomonosov Ridge off Greenland), is a co-operation with several Swedish institutions and is part of the International Polar Year (IPY). The Swedish Polar Research Secretariat will head the geological part of the project with Martin Jakobsson from Stockholm University as principal investigator while the data acquisition under the Continental Shelf Project is headed by Christian Marcussen from GEUS. In addition, the project will have an oceanographic component led by Leif Anderson from the University of Gothenburg.

The co-operation with the Canadian Continental Shelf Project will continue on this cruise after the successful LORITA-1 cruise, as Canada will co-sponsor the acquisition of one seismic line. Furthermore, the plan is to acquire bathymetric data on the Canadian side of the Lomonosov Ridge for the Canadian project.

Oden is expected to be docked from mid-April to 15 May when the multi-beam equipment will be installed. Then Oden will visit Copenhagen on 16 May and continue to Svalbard via Tromsø, Norway. The LOMROG cruise is expected to begin in Tromsø on 12 August and end in Longyearbyen, Svalbard, on 17 September.

Additional research during the Oden cruise north of Greenland, 2007

During the cruise, another Danish research and monitoring project was carried out by the Greenland Institute of Natural Resources.

The purpose of the project is to examine the importance of sea ice in connection with the transport of gases from the atmosphere into the ocean as well as the mechanisms behind this.

The purpose of another part of the project is to examine the impact of the physical transportation processes on the distribution of other dissolved substances such as oxygen and nutrients, and the impact of these conditions on the microbial activity in the area. Although the temperature of sea ice can reach below –20°C to –30°C in the winter, it still contains pockets of liquid highly saline water where microorganisms thrive. Furthermore, tests suggest that microorganisms, apart from being able to withstand extreme cold and high concentrations of salt, must be able to withstand highly variable oxygen conditions. Due to dynamic transportation conditions in the ice and relatively high microbial activity in these pockets, at some points during the year some parts of the sea ice are completely devoid of oxygen. 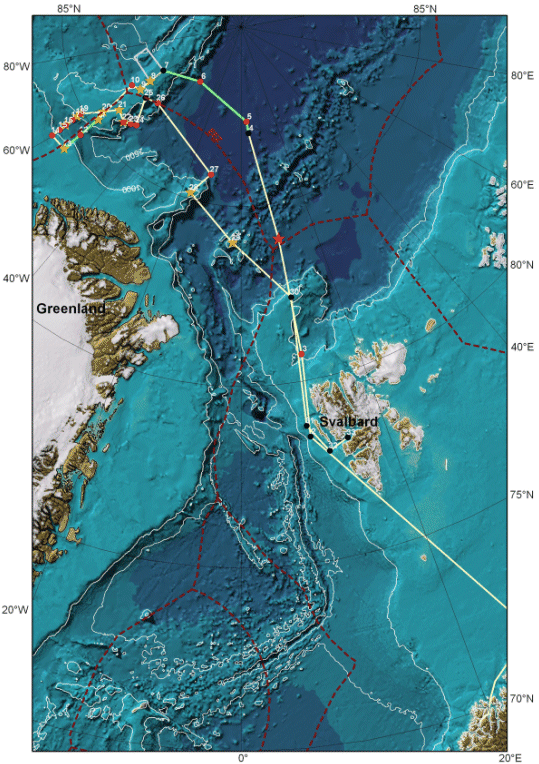 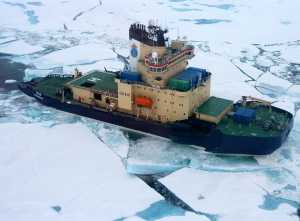 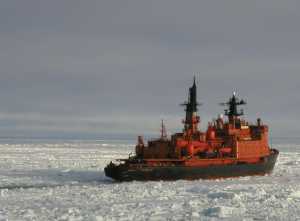 The Russian nuclear icebreaker Sovietsky Souyuz during the Arctic Coring Expedition (ACEX) in 2004. This is a sister ship to 50 let Pobedy (50 Years of Victory).