You are here: Home / The area north of Greenland

The scientific data, referred to as submission, was submitted via the Secretary-General of the UN in accordance with the procedure laid out in the 1982 United Nations Convention on the Law of the Sea, which was ratified by the Kingdom of Denmark in 2004. A state has the rights to the continental shelf within 200 nautical miles of its coast. Claims beyond 200 nautical miles, however, have to be supported by special documentation, which requires the acquisition of comprehensive scientific data sets.

The Kingdom of Norway’s continental shelf beyond 200 nautical miles overlaps the area of the Danish/Greenland submission north of Greenland. In August 2015, the Russian Federation forwarded a resubmission to the CLCS regarding an area in the Arctic Ocean of almost 1,2 million km2 with a considerable overlap with the Kingdom of Denmark’s partial submission. The same is the case for the Canadian submission, which was forwarded on 23 May 2019 and encompasses an area of 1,2 million km2. Furthermore, there is a potential overlap with the USA. After the CLCS has made its recommendations, it will be up to the parties themselves to negotiate bilateral agreements in cases of overlapping claims. These negotiations will take place in accordance with the rules of the International Law of the Sea.

The delineation and subsequent delimitation of the extended continental shelf in the Arctic Ocean is a long process comprising of three steps. The work undertaken by the Continental Shelf Project is only the first one:

1: The first step is determining the boundaries of the extended continental shelf according to the provisions of Article 76 in the United Nations Convention on the Law of the Seas. This includes acquiring the necessary data and forwarding the necessary documentation as a submission to the Commission on the Limits of the Continental Shelf (CLCS) as well as a presentation of the submission to the CLCS. This step is a technical/scientific/legal process.

2: The next step consists of an examination in the Commission on the Limits of the Continental Shelf and in the specially appointed sub-commission (with seven members) in a process leading to a recommendation for the submission under consideration. This process involves negotiations with the coastal state in question and is a technical/scientific/legal process.

3. The third step consists of delimitation negotiations regarding any overlapping claims between the coastal states as will be the case in the Arctic Ocean. This is a diplomatic and ultimately a political process. These negotiations may either take place before all submissions have been considered by the CLCS, as it was the case with the area north of the Faroe Islands, or wait until the CLCS has examined all submissions. Therefore, this step can be very lengthy. 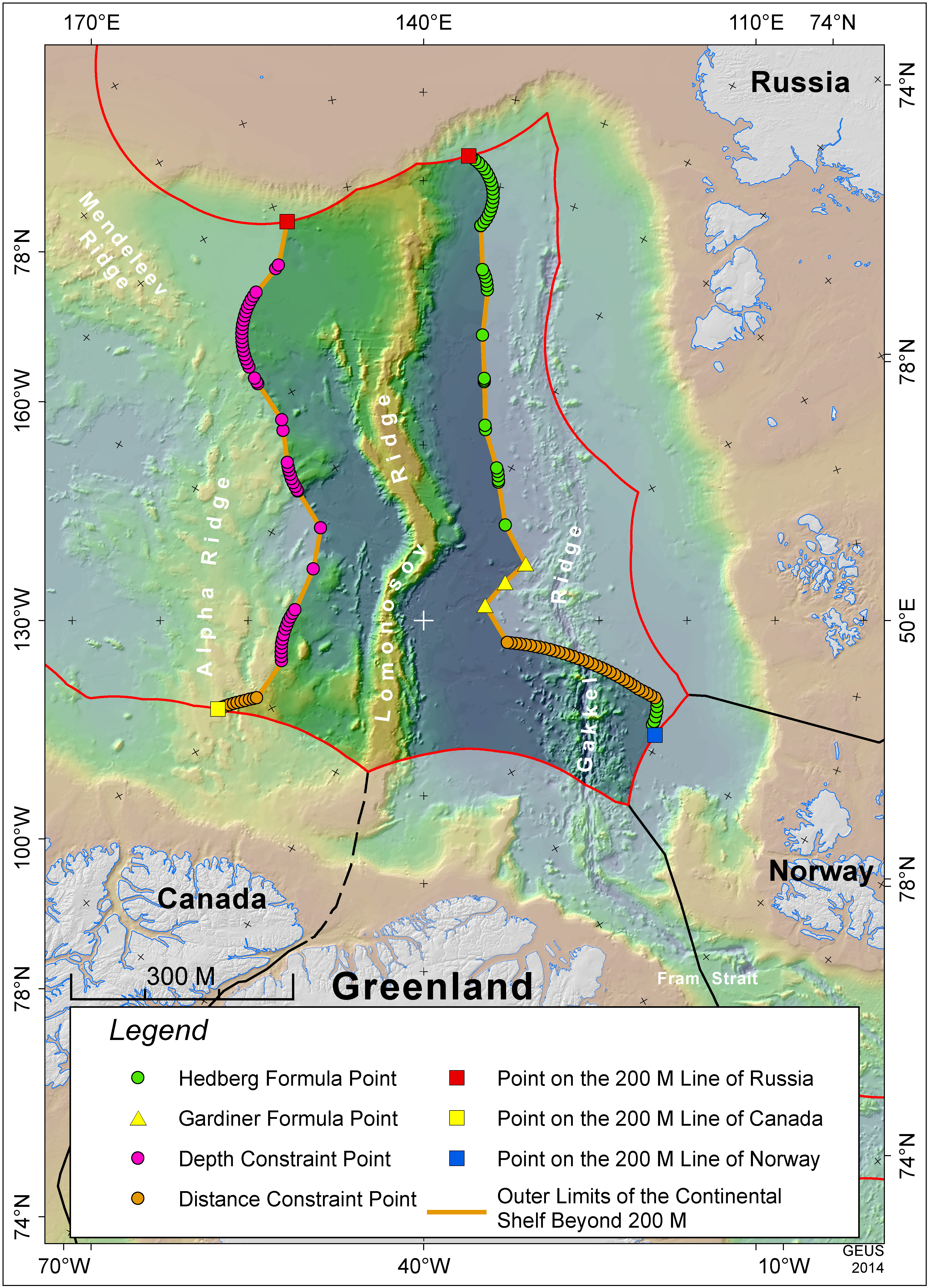 The map shows the submission area north of Greenland (highlighted). Red lines show the 200 nautical miles limits in the Arctic Ocean, the black lines mark the agreed boundaries while the stippled black line represents the equidistance line between Greenland and Canada. The North Pole is indicated by a white cross.