You are here: Home / Cruise south-west of the Faroe Islands

Cruise south-west of the Faroe Islands

A multi-disciplinary cruise south-west of the Faroe Islands

In order to scientifically prove the extension of the Faroe-Rockall Plateau, the necessary data were acquired in 2004. The cruise consisted of two main parts: i) collecting seismic reflection and refraction data and ii) retrieving basalt samples.

In June and July 2004, researchers collected seismic data along two 400-km-long lines by pulling a large array of air guns behind the ship Polar Princess. The signals from the air guns were registered by ocean bottom seismometers (OBS), which were placed on the seabed with a spacing of 10 km. This was simply done by dropping the OBS over the side of the ship. The weight of the attached anchor let the OBS sink to the bottom of the sea. After the data acquisition, acoustic signals were sent to the OBS, releasing the connection between the anchor and the OBS so that the seismometer ascended to the surface where it was picked up.

The OBS registered wide-angle seismic data that were used to obtain a velocity model of the crust along the lines. The velocity models form the basis for the documentation of the natural extension from the Faroe Islands to the remainder of the Faroe-Rockall Plateau. Along the same lines, the researchers collected seismic reflection data that provided a detailed image of the sedimentary structures in the upper part of the underground.

At the banks, there is exposed basalt on the seabed. In order to be able to establish the relation between these basalts and the basalts that make up the Faroe Islands, basalt samples were collected from the banks. Parallel with the seismic data acquisition, the researchers collected high-resolution sparker seismic data and side-scan sonar data. These data were the basis of the choice of drilling positions. The rock drill, which was 5 meters tall, was placed on the seabed at 67 positions. In 27 cases basalt cores or other types of volcanic rock were pulled up, 28 positions contained other kinds of rock and in 12 positions no samples could be recovered. 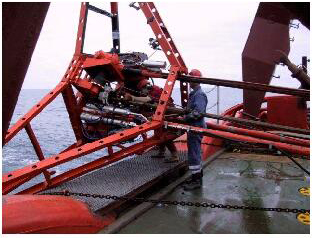 The 5 m drilling system was placed on the seabed at a total of 67 positions.

Afterwards, the cores were chemically analysed and dated in order to compare them with the basaltic and volcanic rocks on the Faroe Islands.

The longest core is 5 m long – a basalt core from Bill Bailey Bank.

Brecciated basalt from the south flank of Lousy Bank.

The cruise was a co-operation between GEUS and Jarðfrøðisavnið (JFS – the Faroese Geological Survey). It lasted seven weeks in June and July of 2004. The acquisition of seismic data was done with two ships: the ESVAGT Connector from Esbjerg, Denmark, which was used for the deployment and recovery of the ocean bottom seismometers (OBS), and the R/V Polar Princess, a Norwegian seismic vessel belonging to FUGRO-Geoteam. This part of the cruise took three weeks. The ESVAGT Connector had time to collect side-scan sonar data during free periods while the Polar Princess was in charge of air gun shots. Following that, the Polar Princess left the project while the ESVAGT Connector collected more side-scan sonar data as well as high-resolution sparker seismic data. Afterwards, the ESVAGT Connector continued as a platform for the drilling. The OBS came from GEOMAR in Germany and Ifremer in France. The drilling equipment was owned by the British Geological Survey (BGS).

The cruise was 13.5 million DKK of which 9 million DKK were spent on the seismic operations. The Faroese Government contributed with half the amount spent on data acquisition. 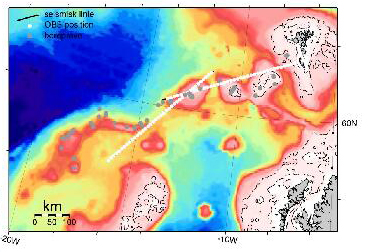 The area south-west of the Faroe Islands consists of banks that are a natural extension of the islands.