As a continuation of the LORITA expedition in 2006 as well as other activities in the spring of 2007 and the LOMROG expedition in 2007, the plan was to acquire bathymetric and gravity data from the sea ice north of Greenland from late March to early May 2009. At the same time, the mapping of the gravity and magnetic fields in the Arctic Ocean north of Greenland and Canada was done by aircraft.

The data acquisition on the sea ice is carried out in cooperation with the Canadian continental shelf project and is based on Canadian logistics (the landing strips in Alert and Eureka, ice camps, and Canadian helicopters and aircrafts).

Helicopters and aircraft will be chartered via the Polar Continental Shelf Project, a national Canadian program that assists with logistics in the Canadian Arctic.

The helicopters and aircrafts in question are five Bell 206 Long Rangers and two DHC-6 Twin Otters, respectively. We expect to charter the helicopters from Universal Helicopters Newfoundland Ltd., while we expect the aircraft to be provided by Kenn Borek Air Ltd. Both companies have previously worked in Greenland.

Aircraft operations in the area north of Greenland will only take place beyond the 12 nautical mile limit. We do not expect to land in Greenland. The helicopters will be based in a main camp placed on the sea ice by Ward Hunt Island. North-east of this position, we will establish a smaller ice camp (“fuel camp”), which will act as a weather and fuel station. In addition, a “science camp” will be established in Greenlandic waters in connection with a Danish research project. This camp will support the helicopter operations. Smaller fuel caches will be established according to need. The exact position of the above-mentioned camps and depots will depend on the ice conditions and other logistical conditions, which will not be known until the operations start.

The Canadian Hydrographic Service (CHS) is leading the joint Canadian-Danish project on the sea ice. GEUS is project leader of the Danish part, while the actual data acquisition is conducted by the Danish Maritime Safety Administration (bathymetrics) and DTU Space (gravity data).

The bathymetric data acquisition is done by placing an echo sounder on the sea ice. The distance between the measuring stations will usually be 5 km but this is reduced to 2 km in areas where the water depth changes quickly. Gravity measurements will be conducted with larger intervals between the measuring stations and is done with a specially damped gravimeter. These gravity data can later be used for calibration of the aero-gravity data. 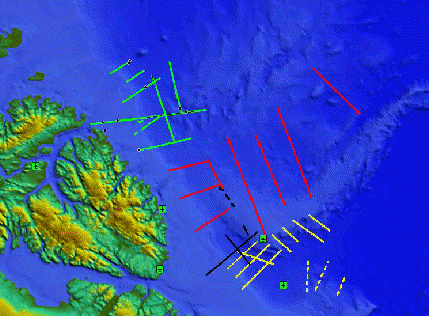 Map 1 shows the planned bathymetric and gravity profiles in the area north of Greenland. The red lines represent the planned Canadian programme in the spring of 2009 and the yellow lines the programme off Greenland. The green lines are data acquired in the spring of 2008 following the same principle. Planes mark landing strips and ice camps (from west to east: Eureka (Canadian weather station), Alert (Canadian military station), Ward Hunt Island Camp, “Fuel Camp”, and “Science Camp”).

The acquisition of aero-gravity and aeromagnetic data is also a joint Canadian-Danish project and takes place at the same time as the data acquisition on the sea ice. In order to acquire the aero-gravity data, a DC3T aircraft from the company Kenn Borek Air Ltd. will be chartered. The project leader for this part of the activities in the area north of Greenland is DTU Space. The Canadian co-operation partner is the Canadian Geodetic Service of Natural Resources Canada. 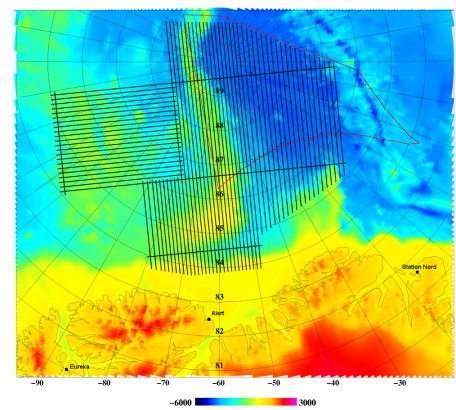 Map 2 shows the planned flight track for the acquisition of aero-gravity and aeromagnetic data as well as the three landing strips (Eureka, Alert, and Station Nord) that we expect to use for the project.

A joint Danish-Canadian data acquisition in the Arctic Ocean.

Test of an AUV in Alert on Ellesmere Island for collection of bathymetric data under the sea ice for the Canadian Continental Shelf Project.