You are here: Home / The area south of Greenland

The area south of Greenland

The area is limited to the west and south-west by the 200 nautical mile limit of Canada and to the north-east by the 200 nautical mile limit of Iceland. Since the shelf off South Greenland is generally relatively narrow, the sediment thickness formula (referred to as Gardiner formula) will come into play in this area. The Eirik Ridge, located southwest of Cape Farewell, is part of the continental slope off South Greenland. In this area and off the eastern part of South Greenland, the 60 nautical mile distance formula (also referred to as Hedberg formula) is used to define the outer limits of the continental shelf. None of these formula lines extends beyond 350 nautical miles from the baseline of Greenland, which is one of two constraint lines according to Article 76 in the United Nations Convention on the Law of the Sea (UNCLOS).

Investigations arranged by the Continental Shelf Project in this area have primarily focused on:

In 2003 and 2006, the Continental Shelf Project acquired seismic reflection data as supplement to existing seismic data. In 2008, multibeam bathymetric data were collected along the continental slope and along strike profiles using a line spacing of approximately 45 nautical miles.

In 2009, seismic refraction data were collected at the Eirik Ridge in co-operation with Canada. Furthermore, bathymetric data in the area were supplemented by data acquired during a German marine geological research cruise that same year. The co-operation with Canada also included the exchange of data and joint interpretation projects.

On 14 June 2012, the Government of the Kingdom of Denmark together with the Government of Greenland submitted documentation for an extended continental shelf beyond 200 nautical miles south of Greenland to the Commission on the Limits of the Continental Shelf (CLCS). The area covers approximately 115,000 km2 south of Greenland and is divided into a south-western part (towards Canada) in the Labrador Sea and an eastern part (towards Iceland) in the Irminger Sea.

The documentation, called a submission, was submitted through the Secretary-General of the UN according to the procedure laid out by the 1982 United Nations Convention on the Law of the Sea and ratified by the Kingdom of Denmark in 2004 (see also the CLCS’ website). A state has a right to the continental shelf within 200 nautical miles from its coast. However, claims beyond 200 nautical miles have to be supported by special documentation. The documentation requires the acquisition of comprehensive data sets, including bathymetric and seismic data.

Regarding Canada, both states consent that the CLCS can examine the respective submissions and an agreement on the delimitation of the boundaries will be negotiated at a later date. With Iceland, the Kingdom of Denmark has made an agreement about how to divide the overlapping area.

Extract of the submission for the area south of Greenland

The remainder of the submission is not publicly accessible. 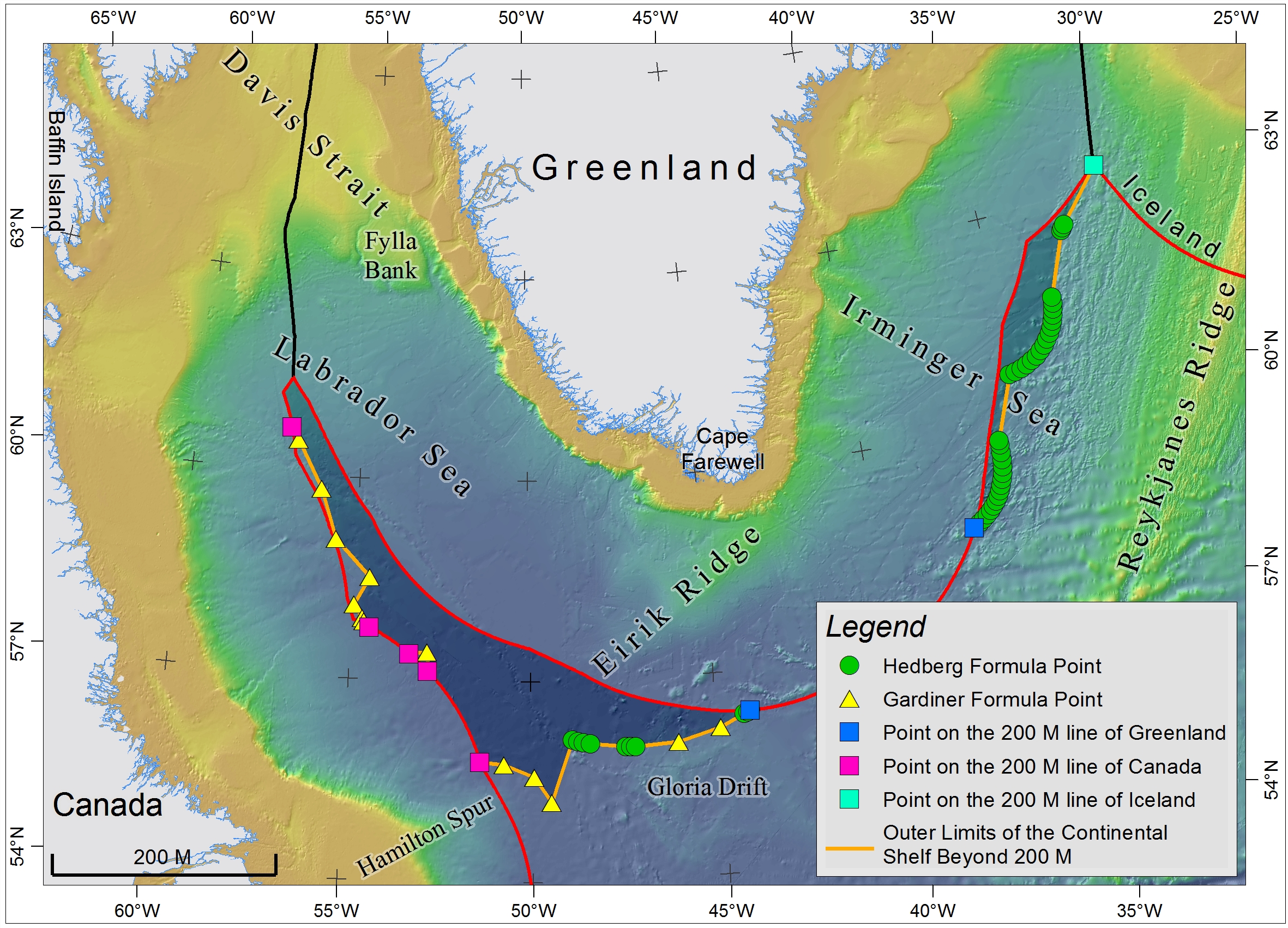 The area south of Greenland. Click here or on the map to see a large version.