The purpose of the CCGS Hudson cruise (project SIGNAL – Seismic Investigations off Greenland, Newfoundland And Labrador) is to collect refraction seismic data in Labrador Sea and the NW Atlantic Ocean that can help support an extension of the continental shelf off Newfoundland, Labrador, and SW Greenland under Article 76 of the United Nations Convention on the Law of the Sea (UNCLOS). The cruise is of mutual interest to both Canada and Denmark. By sharing the ship, equipment, and staff, substantial costs can be saved for the respective Continental Shelf Projects of the two countries. At the same time, the available resources are used more efficiently and the overall quality of the data acquisition is improved.

While the data are collected for the purpose of UNCLOS, there is also a strong scientific interest in the seismic program. For this reason, the data acquisition will be carried out in close cooperation with Dalhousie University (Halifax, Nova Scotia).

CCGS Hudson will leave Halifax, Nova Scotia, on June 5, 2009 and will return to St. John’s, Newfoundland, on July 10, 2009. Data acquisition is planned along five lines.

The seismic source is an airgun array consisting of 12 Sercel G-guns with a volume of 520 cubic inches each. The array is provided by GSC and is anticipated to run with much less maintenance than the old Bolt-gun array.

Sonobuoys will be brought on the ship to have a backup in case of ice conditions that make a deployment of OBS south of Greenland too risky. In addition, sonobuoys can be used to decrease the receiver spacing at critical locations along the other lines.

XTB (Expendable Bathythermograph) probes will be used to determine the water velocity in the study area.

Newsletters from the expedition

Learn more about the cruise by reading the weekly newsletters written by Thomas Funck, co-chief scientist on the cruise: 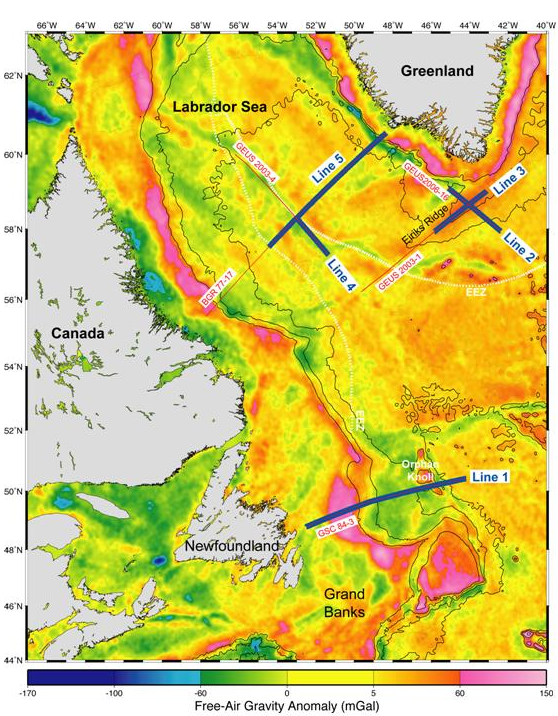